We make several different altimeters and a few things to make your AV bay a little bit friendlier.  We cover the gamut of altimeters, from a simple 2-output deployment controller all the way up to a 6-output flight computer, and a flight computer with integrated GPS tracking.   Pretty much whatever you want to do, there’s an Eggtimer for you!

All of it is in kit form, of course… you build it yourself and save $$$, get a great value for the money, and get the satisfaction of doing it yourself.

For a quick-view chart that shows you all of our altimeters, click on the link below.

The Eggtimer Quasar combines a 3-output WiFi-enabled flight computer with an Eggfinder-compatible GPS tracker.  On the altimeter side, it has 3 outputs: Drogue, Main, and a configurable AUX output that can act as an airstart timer or a backup Drogue or Main. Like the Eggtimer Quantum and Proton, it’s WiFi enabled… all functions are remotely configured via a WiFi/browser interface (no Internet or apps needed): changing settings, arming/disarming, downloading flight data, and performing deployment tests.

On the telemetry side, it sends out GPS and altimeter telemetry once per second. It uses the same tried-and-true Eggfinder LCD receiver, and displays your real-time altitude and deployment channel status, and apogee after landing.   It’s available in the license-free 900 MHz band, the EU/UK 869 MHz band, and the 70cm Ham band. 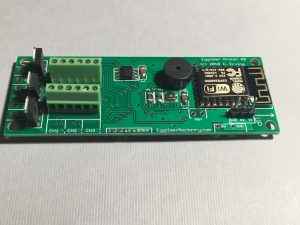 The Eggtimer Proton is one of the most advanced flight computers that you can buy.   It combines SIX deployment channels with a 120G accelerometer, perfect for those really ambitious projects.  It’s also WiFi-enabled, so you don’t need to mess with any cables or special software to configure, download, or perform depployment tests.   In addition to the “standard” Drogue, Main, and Airstart modes  you can also configure the channels to trigger on almost any condition that you can think of, and there are no dedicated channels… any channel can perform any function.   It has lots of safety features, including our exclusive dual-switched outputs that essentially leave the outputs “dead” until you’re in flight.  There is also servo support on the way down… do you want to go Falcon 9 and have landing gear deploy using servos after the Main chute opens?   You can do it with the Proton!

The Eggtimer Quantum is the  first WiFi-enabled flight computer.  Using just about any WiFi/browser enabled device, you can program,arm/disarm, and download data without any cables, apps, or Internet connections.  It’s the easiest full-function alltimeter that you’ll ever use!  Features include two high-current deployment channels, airstart capability with velocity/altitude/breakwire tests, remote deployment testing, and lots more. 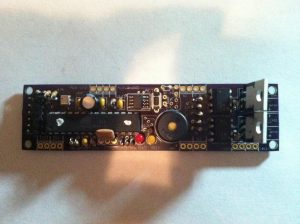 The Eggtimer Classic Flight Computer is a full-function barometric two-channel flight computer that can be used to deploy parachutes, airstart second-stage engines, and log flight profile data.    It supports standard main-drogue  multiple chute deployment, or you can use your motor’s ejection charge to deploy the drogue chute and configure the drogue channel in airstart mode to support a two-stage multiple deployment rocket.  It can be used to modulate  standard hobby servos too, so if you’re a water rocket enthusiast this is the least expensive  solution on the market that can be used for non-pyro multiple deployment.  With all through-hole assembly, it’s also the easiest altimeter to assemble that we offer. 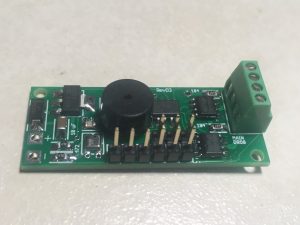 The Eggtimer Quark is a simple and inexpensive dual-deployment controller.  It is ideal for those just getting into electronic deployments or for those who want something the “just works” out of the box.  At $20, it’s far and away the least expensive deployment controller on the market.   It’s also one of the smallest units available, at only 1.8″ x .75″ it fits comfortably into a 24mm (BT50) tube.   Just because it’s inexpensive doesn’t mean you give up features… there are two drogue settings, four main altitude settings, you can perform deployment channel tests (can YOUR basic altimeter do that?), and it beeps out the apogee after landing. 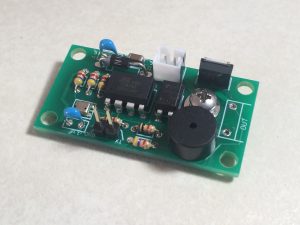 The Eggtimer Apogee is the easiest and least expensive deployment altimeter on the market. In a tiny 1.75” x .9” package that fits into a 24mm motor mount, the Apogee deploys your parachute at apogee and beeps out your altitude, with no programming of any kind. It has a built-in NAR/TRA-approved screw switch, and an on-board JST-PH battery connector for small 1S LiPo batteries. It’s the ideal companion for a Jolly Logic Chute Release™ because it does the things that the JLCR cannot… get the parachute out and tell you how high you went.

Not only is it easy to use, but it’s also easy to build.   With almost all through-hole parts, it’s designed to be easily built by just about anyone.

Also available is a special 3D-printed Easy Mount for the Eggtimer Apogee (designed by Chris Bender of Lab Rat Rocketry), it makes it a snap to install an Apogee into most 38mm or larger nose cones. It can be easily interchanged from one rocket to another, and includes a built-in charge well and terminal screws. It’s designed to use a tiny 110 mAH 1S LiPo battery, which Eggtimer Rocketry will also be sourcing. 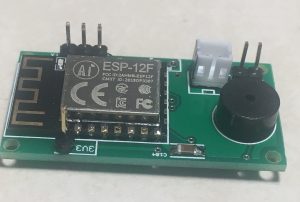 The Eggtimer ION is a WiFi-enabled  flight logger.   Similar to the Eggtimer Quantum but without the deployment channels, the ION logs altitude,  velocity, and flight events  at 20 samples per second.   Because it’s WiFi, you can download data to just about any WiFi/browser enabled device, with no Internet or apps required.

At only 22 mm x 38 mm and about 6 grams, it’s easy to add flight data logging to just about any rocket.   It’s easy to wrap up into a small chute protector with the battery, or your can mount it to a sled in a more “classic” AV bay.  It uses a small   1S LiPo battery, and has an onboard jumper “switch”.   It auto-arms for flight after 60 seconds, but can also be remotely armed/disarmed if you want.     In addition, you can also connect it to the Eggtimer Telemetry Module and get real-time telemetry using an Eggfinder LCD receiver. 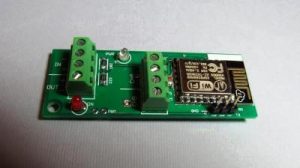 The Eggtimer WiFi Switch is the answer to the question, “How to you turn on something in an AV bay when it’s 8 feet off the ground?”   Using ANY WiFi/browser enabled device, you can turn your electronics on and off, over 100′ away.  Have a two-stager and don’t want to stick your face next to a K sparky motor to turn on the altimeter while standing on a ladder?   No problem… with the WiFi switch, you can stand back and turn it on remotely.   Not only that but it has two continuity checking circtuits, that can connect to ANY altimeter… not just Eggtimer products.   You can remotely check continuity, and battery voltage too. 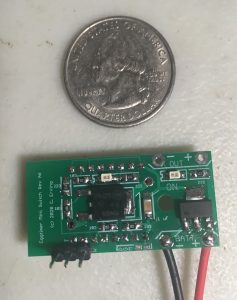 The Eggtimer Mini Switch is a smaller version of the acclaimed Eggtimer WiFi Switch.   Like the WiFI Switch, you can turn your AV stuff on and off from over 100′ away, using virtually any WiFi/browser enabled device.   It has the same security and remote voltage checking capability, too.   It’s much smaller, though… only 1.5″ long and .75″ wide, it can fit into virtually any AV bay.   To save space, we removed the continuity checking feature… we’ve found that a lot of people don’t use it anyway.  Otherwise, it has the same specs as the WiFi Switch… in a package only 37.75 mm x 19.15 mm 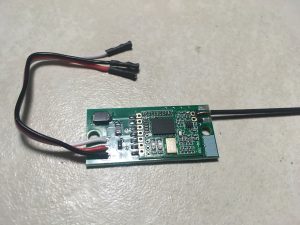 The Eggtimer Telemetry Module is an add-on for the Eggtimer Quark, Quantum, and Proton altimeters.   It transmits flight data to an Eggfinder LCD receiver on the ground, giving you real-time visibility into what your rocket is doing.   Typical real-time data can include altitude, velocity, acceleration, elapsed flight time, flight phase, deployment channel status, voltage, and temperature.   You also get “historical” data such as apogee, maximum velocity, and maximum acceleration.   (Actual data is dependent on device)   This is a great companion to an Eggfinder GPS tracker… the GPS tells you where you rocket is located, and the telemetry tells you what it’s doing.   Have you ever lost sight of a rocket and wondered how high it was, if the deployment charges fired, or how fast it was descending?   Well, now you’ll know! 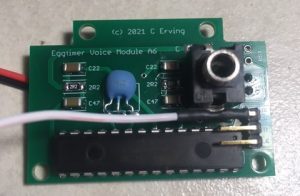 The Eggtimer Voice Module is an add-on for the Eggfinder LCD receiver, when used with the Eggtimer Telemetry Module it will speak out your real-time altitude, apogee, and deployment events (depending on which Eggtimer altimeter it’s used with).   This gives you instant feedback as to the performance of your rocket, and also confirms that your ejection charges have fired.   It can be used with standard 3.5mm earbuds, or you can attach a 3.5mm AUX cable to it and use an amplified speaker, your car stereo, or your club’s PA system to let everybody know how awesome your flight is.

About our Degree of Difficulty Scale…

We rate Degree of Difficulty from 1 to 5, based on how small the parts are, how many parts there are, how long it takes to build, and how critical to proper operation minor soldering mistakes would be.   A kit rated 1 is all through-hole, and is relatively forgiving of less than perfect solder joints.   A kit rated 5 has a lot of small 0805 surface mount parts, and has .050″ pitch IC’s.   If you’ve never built a kit before we recommend that you stay with the lower numbered kits, once you have successfully built a few of them then you can tackle the 4’s and 5’s.