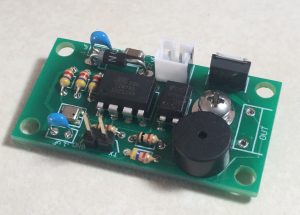 What does the Eggtimer Apogee do?

The Apogee deploys your parachute at apogee, and also beeps out your altitude after the flight.

Why do I need this when my motor already ejects the parachute?

Good question.   Motor delays are either fixed to a certain number of seconds after burnout, or can be adjusted within a certain range by drilling out a bit of the delay grain material.   The problem is that this is not an exact process… there is a 20% allowable delay in even the factory-supplied delay, so if you have a 10 second delay it could be a short as 8 seconds or as long as 12 seconds.   4 seconds is a lot of variance.

Another reason is that you may be flying a very light rocket with a large motor, and your rocket’s time-to-apogee significantly exceeds the maximum motor delay.   If you keep the motor delay as-is, your parachute is going to come out early… robbing you of altitude, and possibly causing the dreaded “zipper” or a ripped parachute.

Finally, it’s a great companion for the Jolly Logic Chute Release(tm), because it does the two things that the JLCR cannot… get your parachute out and tell you how high you went.

How big does my rocket have to be to use the Eggtimer Apogee?

The Eggtimer Apogee is about 1.75″ x .9″, and will easily fit in a 24mm motor mount tube.  If your rocket can take a big enough motor to need electronic deployment, then the Eggtimer Apogee will almost certainly fit in it.   We’ve sized the Easy Mount body and the retaining ring to fit inside a standard 38mm coupler tube, but if you rocket is as small as 24mm you can still fit the Apogee board in without too much trouble.

Not at all.  The Apogee can easily be incorporated into the nose cone of most rockets, and if your nose cone is relatively flat on the bottom and/or uses a bulkplate (i.e. fiberglass nose cones) then it’s even easier with the Eggtimer Apogee Easy Mount.   You basically drill a 1″ hole for the Easy Mount, two holes for the screws, and screw it in.  Easy peasy.

What else do I need to use it?

You’ll need a battery, we sell a very small 1S 110 mAH LiPo battery that fits very neatly into the Easy Mount, but any 1S LiPo battery will do.   We supply a JST-PH connector, which is the most common connector used for small LiPo’s.

You’ll also need some ematches, and the pyrotechnic powder.   For ematches, we recommend the MJG Firewire ematches… they don’t require any special permits to use, and can be shipped non-hazmat.   For the powder, you’ll normally just use the powder that’s already in your motor; just dump it out into a cup or small container, and load it into the charge well with the ematch.   Pack the charge well with some “dog barf” cellulose insulation, tape it shut, and you’re ready to go.  If you’re using the Eggtimer Apogee Easy Mount, there’s a step-by-step guide to prepping the charge well in the User’s Guide.

Can I use it for high-power flights?

Yes.   The Eggtimer Apogee is rated for 60,000′, and is fully mach-immune.   In fact, it’s an ideal drogue parachute backup device for small fast rockets, i.e. 54mm minimum-diameter on a K2050ST or similar high-thrust motors.  The software is built on the many years of experience that Eggtimer Rocketry has with HPR flights with thousands of customers and many thousands of flights.

I heard about the recent Tripoli “switch rule”, do I need to add anything to the Apogee to make it compliant?

In most cases, no.   The Apogee comes with a screw switch built-in, which completely disconnects the power.  If you decide not to use it, you’ll have to come up with your own switch, of course.

Can I move the Easy Mount from one rocket to another?

Yes.   There are two basic ways to use the Easy Mount, either by screwing the mount into the nose cone from the outside (typically used for plastic nose cones, using #4-1/2″ self-tapping screws) or by epoxying the Easy Mount Retainer Ring to the inside of your nose cone and screwing it in with the supplied #2-3/4″ machine screws (typically for nose cones that use a bulkplate that has to be glued in during assembly of your rocket).   The body of the Easy mount stays the same, so all you need to do is to unscrew it from one rocket and screw it into the other with whatever screws are required.